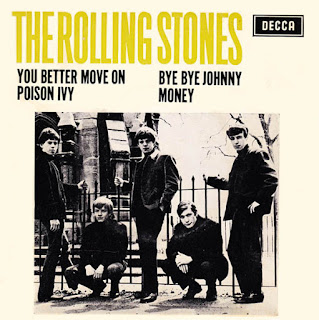 The Rolling Stones features R&B covers of some of the band's favorite artists, and some recent American hits. Impact Sound is officially listed as the EP's producer. Eric Easton is possibly involved, Andrew Loog Oldham produced the opening track "Bye Bye Johnny".  Despite the rawness of the production, the EP reached no. 1 in the UK EP charts in February 1964, having entered the chart the week after its release.

The EP was released in Canada in 1964 by London Records Canada. The release was identical to the UK version lncluding the picture sleeve along with the British label number DFE 8560. The Canadian EP pressing also used British stampers.

Bruce Eder of AllMusic writes: "The real centerpiece was Arthur Alexander's 'You Better Move On,' an American-spawned favorite that the band had been doing in concert — this was their chance to show a softer, more lyrical and soulful sound that was every bit as intense as the blues and hard R&B they'd already done on record..."

"Bye Bye Johnny" and "Money" did not see official US release until 1972's retrospective More Hot Rocks (Big Hits & Fazed Cookies); "You Better Move On" was featured on 1965's December's Children (And Everybody's); and "Poison Ivy" was issued in 2002 on the remastered version of More Hot Rocks.

Unavailable for decades, The Rolling Stones was reissued on Compact Disc in 2004 on the Singles 1963–1965 box set through ABKCO Records.

In November 2010, it was made available as part of a limited edition vinyl box set titled The Rolling Stones 1964-1969, by itself digitally at the same time, and in 2011 as part of the 60's UK EP Collection digital compilation. On November 23, 2012 the EP was reissued on 7-inch vinyl record as a part of Record Store Day Black Friday 2012.