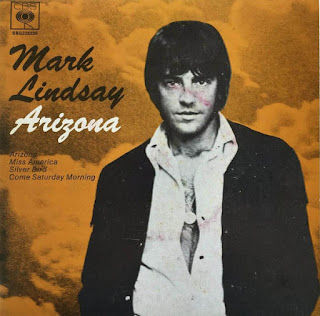 Mark's musical career began at the age of 15 fronting a local group in Idaho. A year later, he met keyboardist Paul Revere, and they formed The Downbeats, later to be called Paul Revere & the Raiders. In the 1960s, the Raiders chalked up 17 hot 100 hits and two network TV shows, "Where the Action Is" (1965-1967)and "It's Happening"/"Happening '68" (1968-1969). In the early 70s Mark turned to film scoring. He continued to make inroads as a solo artist with "Arizona", and as a group leader with The Raiders. By the end of the decade, Mark Lindsay retired from active performing but worked as an A&R executive for United Artists Records. As of recently, he has returned to solo performing with his "Mighty Band" playing over 100 dates a year. 1996 saw the release of his comeback album "Video Dreams".


"Arizona" is a song written by Kenny Young and recorded in 1969 by Mark Lindsay, a solo effort while still lead singer for Paul Revere and the Raiders. Lindsay was backed by L.A. session musicians from the Wrecking Crew. The single peaked at #10 on the Billboard Hot 100 chart on 14 February 1970 and was awarded a RlAA Gold Disc in April 1970. "Arizona" reached #10 in Australia and #2 in New Zealand.

"Silver Bird" is a song written by Kenny Young and recorded by former Paul Revere and the Raiders member Mark Lindsay, with L.A. session musicians from the Wrecking Crew, in 1969. The single reached number 25 on the U.S. Billboard Hot 100 during the summer of 1970. In Canada, "Silver Bird" peaked at number 10.

"Miss America" is a song written by James Jerome Kelly III and recorded by Mark Lindsay it reached #44 in May 1970.

"Come Saturday Morning" is a popular song with music by Fred Karlin and lyrics by Dory Previn, published in 1970 and recorded by Mark Lindsay for his 1970 album Silverbird.
Posted by Deutros at 08:40