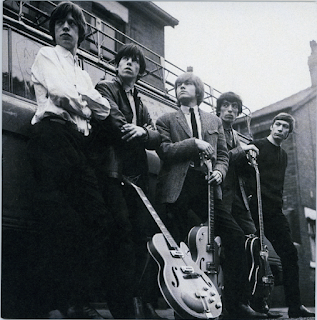 On Thursday Marh 19th,1964 a few days after the Stones found out they were going on their first tour of America in June and the day after they recorded 14 tracks for Radio Luxembourgh, the band went to the Camden Theatre to record a thirty minute BBC radio show.The show itself was part of a series called Blues In  Rhythm broadcast at 9.30 on the morning of Saturday 9th May. The first half of the broadcast was given over to Georgie Fame and The Blue Flames and compered by singer Long John Baldry. He introduced the Stones as "those charming deviationists" They performed Route 66,Cops and Robbers,You Better Move On and Mona in front of an audience that had been imported from the Flamingo Jazz Club where the band had last performed in January 1963.
Posted by Deutros at 05:57