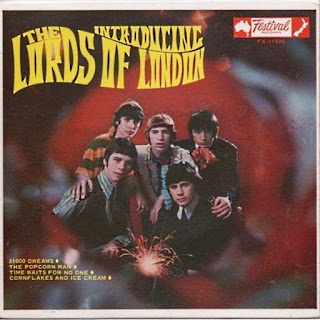 The Lords of London were Canada's #1 teen chart toppers in 1967. As their only hit "Cornflakes And Icecream", a commerial teeny bopper record was played in regular rotation across the country, it's B sde, the best song ever released by the Lords "Time Waits For No One" was ignored. Easily one of the best Canadian releases of the year, "Time Waits For No One", was however reviewed in Billboard Magazine while "Cornflakes" was omitted. Somebody had their thinking cap on!

The Lords Of London began in 1965 when Danny Taylor, Hughie Leggat, John Richardson and Greg Fitzpatrick; four teens from North York, Ontario (a suburb of Toronto), decided to form a Rolling Stones cover band. Danny, Hughie and John had been playing together since the 8th grade in their instrumenal band, Danny Taylor and the Phantoms. They adapted the name Lords of London and entered the Earle Grey Collegiate Battle Of The Bands in October 1965. Their big competition were the Hogs and 15 year old Greg Fitzpatrick's Mysterions who were based in Etobicoke (another subdivision west of the city). The Mysterions won and netted the twenty five dollar prize money. Danny knew Greg becasue Greg had once dated Danny's cousin. Greg lived in the Lords neighborhood even though his band was from across town. He was getting tired of travelling two hour round trips three times a week for practise and had considered looking for another group. Danny asked if Greg would play bass, (he had been a guitar player in the Mysterions). He said yes, and that night he found himself playing bass before a crowd of thirteen hundred teenagers...and he had never played bass before! The band swung that show, and Greg was asked to remain with the band. The Lords manager even went out and bought Greg a new Bill Wyman model bass! 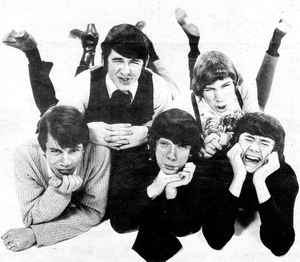 Sebastian Angello went to school with Danny, John, Hughie and Greg and had been well aware of their band. He wanted to join a group that was already established. Sebastian was critical of the Lords Of London, and thought that the only reason Danny was even allowed in a band was because he owned a drum kit! So Sebastian joined a band called D.K. And The Lords who were from East York and were quite a bit older than him. But in 1966, Greg went away for the summer, and the Lords Of London recruited Sebastian as a fill-in. At the time Danny and Sebastian were 13, Greg a and Hughie were 15 and John was 16! They had steady bookings and played their own original r'n b styled material. Gigs were at teen dances, school gym's and rural barns that had been converted in to dance halls. Soon they were able to tour on the weekends, and the boys began to miss school on Friday and Monday. This, and long hair caused Sebastian to be thrown out of school at 13! During the school year the rest of the Lords followed suit and the band began to play full-time.

One weekend of touring took the band to Kirkland Lake in Northern Ontario. They were warned in advance that they had better learn some top forty tunes, since the small town teens would appreciate that more than hearing originals. "Wooly Bully" went over big, and the show was a huge success. Greg, the main song writer, decided to head away from r 'n b and do more pop songs. The management agreed that the adult audiences were not taking the band seriously, and they should aim at the teen pop crowd exclusively, and go for a new image. It was around this time that Sebastian began blacking out one front tooth! 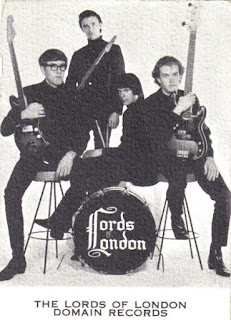 Late in 1966 the Lords went to RCA studios in Toronto to record their first single for Apex "Corn Flakes And Ice Cream/Time Waits For No One" on a 4 track unit. Their established teen fanclub requested "Cornflakes" so often that it shot to #1 in Toronto and soon followed suit in the rest of Canada. It was also number one in Boston, Georgia, and Australia where it had been released on Decca. In efforts to capitolize on their popularity, the group toured across Canada opening for bigger acts and appeared on CTV's After Four in Toronto, It's Happening, In Person and Up Beat in Cleveland, Ohio.

A follow up single was quickly recorded but "Popcorn Man/21,000 Dreams" promptly flopped. By this time the boys were a little older and were playing the Yorkville clubs in Toronto. Of course their favorite local group were the Ugly Ducklings who had a residency at the Hawks Nest. After many attempts, the Lords finally got a show at the Hawks Nest and showed off in front of their heros. Sebastian reports that the Duckies enjoyed their set! The band was still able to tour regularly, and were recieving more offers than they could commit to, so the band hired a camera man from the CTV Network to produce a short film of three songs "Popcorn Man", "21,000" and "Cornflakes And Ice Cream". The idea was that they would hire out the film while they played in another city! 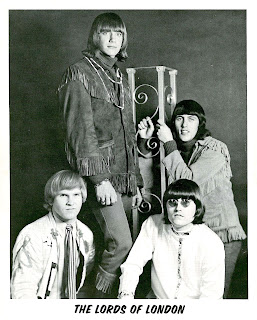 In 1967 the Lords of London made it to various US cities, and were set to make the trip to California (written up in the Go! magazine). Sebastian recalls one night in New York were the band was doing some publicity work. The boys were lolling about in their hotel room, bored, when they decided to break into their managers room and steal some alcohol. To their delight they found bottles of champaign chilling in the tub! The boys promptly got rolling drunk, and when the manager returned to his room with a hooker, he found Danny passed out. John was still concious and ran off with the hooker (who's fee had already been paid)!

In 1968 the band recorded a third single, but they were not progressing past the teenybopper market, which was waining as they grew older. It was about this time that Sebastian left, and began working solo. The rest of the Lords decided to disband from their name, and re-formed under the name Neucleus an played progressive rock.

Email ThisBlogThis!Share to TwitterShare to FacebookShare to Pinterest
Labels: Lords Of London