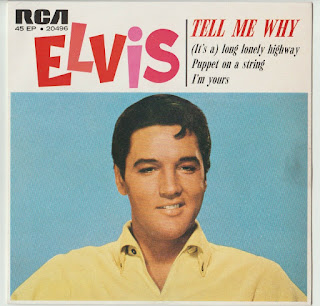 By the start of 1966, Elvis’s single record releases had found their final resting places well back in the Hot 100’s top 20. (The only top 10 Presley record in the previous two years was “Crying in the Chapel.”) Released in late 1965, “Puppet on a String” was typical of Presley chart action at that time, peaking at #14. Its follow-up, “Tell Me Why,” performed so poorly that it stopped dead at #33 on Billboard’s chart, making it the lowest rated A-side single in Elvis’s career to that point. Its drop of 19 chart spots below its predecessor also was a career high for Presley at that time. “Tell Me Why” deserved its fate. Recorded in 1957 and rejected for release then, it was dusted off by RCA nine years later and palmed off on the record-buying public, which justly ignored it.

"I'm Yours" is 1961 song recorded by Elvis Presley which appeared on the Pot Luck with Elvis album. The recording was released as a single in 1965. It was written by Don Robertson and Hal Blair. The song was recorded by Elvis Presley on June 26, 1961, at RCA's Nashville studios, and released on the album, Pot Luck with Elvis, on June 5, 1962. It was published by Elvis Presley's publishing company Gladys Music, Inc. The single was also released in Canada, France, and New Zealand. It was not released as a single until three years later when it was featured in Presley's film Tickle Me (1965). "I'm Yours" peaked at number 11 on the U.S. Billboard Hot 100 in October 1965. "I'm Yours" reached the top of the Billboard Easy Listening chart to become Presley's third consecutive number-one single on the chart.

May 26, 1963 - Elvis goes to RCA's Studio B in Nashville working on what will eventually become 14 recorded masters. The songs are intended to make up an album and a single with 'Devil In Disguise' selected as the A-side. The album however is never released with the songs parceled out over the next few years as singles or soundtrack album 'bonus selections'.(It's A) Long Lonely Highway Recorded: May 27, 1963 first released on Kissin' Cousins. Didn't make Billboard's Hot 100, but listed as "bubbling under" at #112 #96 on Cash Box Top 100.