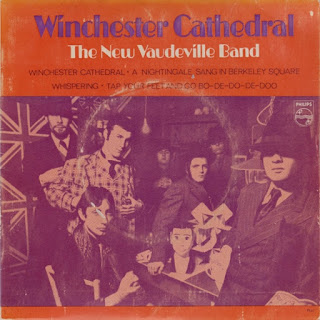 The New Vaudeville Band was a group created by songwriter Geoff Stephens in 1966 to record his novelty composition "Winchester Cathedral", a song inspired by the dance bands of the 1920s and a Rudy Vallee megaphone-style vocal. To his surprise, the song became a transatlantic hit that autumn, reaching the Top 10 in the United Kingdom and rising to #1 in the United States. Initially a studio group composed of session players, Stephens quickly assembled a permanent group to continue recording and to play live shows. The New Vaudeville Band placed several singles in the US and UK top 40 through 1967 before dissolving. The group has been periodically revived since, without Stephens' participation. 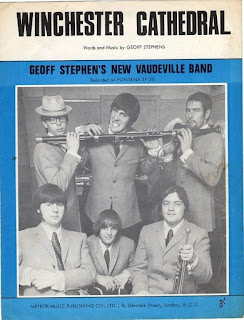 The original version of the New Vaudeville Band was an assemblage of studio musicians, specifically gathered by Geoff Stephens to record the song "Winchester Cathedral" which he both wrote and produced. The record sold over three million copies worldwide, earning the RIAA certification of gold disc status. The track also won a Grammy Award for Best Contemporary Song in 1967. The lead vocal was sung by John Carter, formerly of The Ivy League, who had sung on the demo of the song, which Stephens decided to keep for the commercial release.

Assembling the continuing band (1966) When Stephens received several requests for the New Vaudeville Band to tour and to record a full-length album, he had to put together a group, for the song had been recorded by session musicians hired only for the recording. He contacted the Bonzo Dog Doo-Dah Band, which played similar music at the time. Only Bob Kerr from that group was interested, so he left the Bonzos in order to help Stephens form a touring version of The New Vaudeville Band, which included original session drummer Henri Harrison. Meanwhile, John Carter had no interest in continuing with the group as a singer, though he still co-wrote the occasional song with Stephens for use by the group. The new lead singer of the group was Alan Klein, who was billed as 'Tristam - Seventh Earl of Cricklewood'. Klein also wrote some of the group's material. Mick Wilsher, on guitars, also sang occasional lead vocals. The official line-up as of late 1966 was: 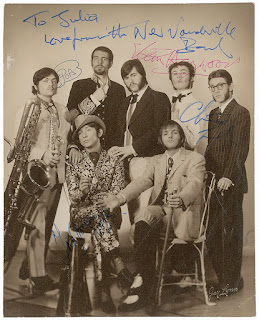 Stephens was not officially part of the group, but produced and arranged their recordings, wrote or co-wrote much of the original material, and selected the cover tunes that the group played.

An initial long-playing album by this line-up was issued in late 1966 by Fontana Records, also titled Winchester Cathedral. This album contained the Geoff Stephens/Les Reed composition "

A little later in 1967, the New Vaudeville Band released the Finchley Central album, which was rejigged slightly and retitled On Tour in the US. (The albums shared 9 tracks; the US version dropped 3 tracks and added two others.) Both albums contained the single "Peek-A-Boo", which made the Billboard chart that February and reached No. 7 in the UK Singles Chart. The line-up fluctuated somewhat around this time, as Chris Eedy (on bass and tuba) replaced Korner, and trombonist Watts was replaced by a trombonist allegedly named Charles Obscure. 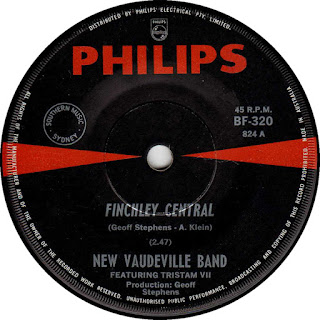 A further UK and US hit followed with "Finchley Central" (No. 11 UK, No 24 US), and then the UK-only hit "Green Street Green" (No. 37), both based on locations in London. "Green Street Green" also scraped the lowest rungs of the Australian chart at #92, tracked as a two-sided hit with the charting B-side being a cover of "Thoroughly Modern Millie".

The New Vaudeville Band was managed by Peter Grant. Kerr left the group following disputes with Grant; he then formed his own group, Bob Kerr's Whoopee Band. "Green Street Green" was the band's final hit. A further single ("The Bonnie and Clyde") was issued in 1968, but flopped. The band quietly broke up shortly thereafter. 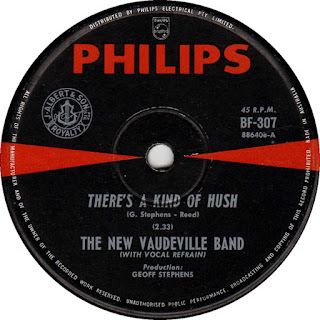 There's A Kind Of Hush", which was quickly covered by Herman's Hermits who had a huge hit with the song in most of the world in early 1967. However, the New Vaudeville Band version of the tune was issued as a single in Australia and South Africa, and became a significant chart hit in both those territories.